You are here: Home / Parenting Blog at KidsAintCheap / Money and Finances / Major Illness/Injury: How to Protect Your Finances… 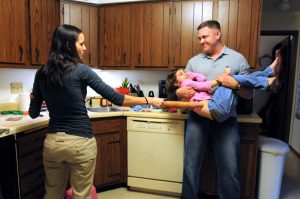 In the past six months, my dad has had an emergency quadruple bypass and an 11.5 hour operation to repair an abdominal aortic aneurysm (look it up on Google – you’ll be shocked that he survived). Needless to say, he’s also been out of work for just about all of that time. However, they’ve managed to survive financially. Could you?

Guaranteeing A Stream of Income

By now I think the duck who touts the importance of short-term disability insurance is basically a pop culture icon. You’ve probably heard him quack away about how this insurance gives you a stream of income to pay everything from medical bills to household expenses. This is the most critical reason why my parents have been able to weather the proverbial storm as my dad has recovered from two major surgeries in such a short period.

A few years ago, my dad’s employer offered company-sponsored short-term disability insurance through another major provider. My dad’s company would pay 60 percent of the annual premiums, leaving my dad with just a $100 tab. My dad never used it, until some routine screening found major blockages in the arteries around his heart. He was out of work for eight weeks, but because of this insurance, he was paid about 55 percent of his typical weekly salary, giving him and my mother more than enough cash to pay the bills. When he had the aneurysm surgery a month later and was out of work for 12 weeks, he was once again sent weekly checks thanks to the policy.

My parents paid off their home loan years ago, but for many individuals who find themselves temporarily out of work, this is the single biggest financial obstacle they encounter.

However, there are ways to lessen this burden. If you can prove that your financial hardship will only be temporary –  six months or less, typically – then your lender may allow you to take out a forbearance. This essentially suspends your mortgage payments for six to twelve months while you’re out of work; once you’re back on your feet – and back at work – you’ll have another six to twelve months to repay the principal and the interest you skipped.

Some people may turn to refinancing an existing home loan instead. Using a mortgage calculator can show you how this can reduce your monthly payments, but beware: refinancing also comes with closing costs that may temporarily increase your out-of-pocket expenses before you’ll see a real return on your investment. Play around with a home loan calculator to see whether or not this move could pay off for you.

Taking Out A Personal Loan

If you have to, you may need to take out personal loans or payday loans from a company like LendGreen.  This can be a quick way to get the cash you need to pay your medical bills while you’re waiting for insurance to kick in.  Remember, claims can sometimes take 8 weeks or longer to be processed, and if you have to pay for things up front, you may need some quick cash.

When I was working in TV news, I once covered a story about a mother of three with terminal cancer. When her short-term disability coverage ran out – most policies will only let you collect benefits for a few months at a time – her coworkers stepped up to the plate, donating their sick time and vacation days on her behalf so she wouldn’t have to worry about paying the bills in her final weeks. Sometimes, asking your boss or coworkers for help can mean the difference between financial hardship and security.

What have you done to protect your finances from a major disruption in income?