You are here: Home / Parenting Blog at KidsAintCheap / Growing Up / How Young is Too Young? TV Edition 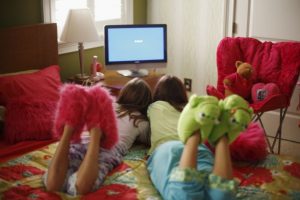 A friend of a friend recently mentioned that she and her husband were excited about the purchase of a wall mount they got on sale so they could finally mount the TV in their son’s bedroom. While I normally wouldn’t have any real issue with this, though I do think bedrooms should be for sleeping and not TV, their son is only 14 months old. I don’t care what argument you have ready for me, 14 months is way too young to have a television in your room.

Apparently I’m the minority in this group of people (note: these are not my real close friends). When I asked a few of my other friends (and friends of friends) what they thought, they didn’t seem to be as outraged as I was. They actually liked the idea of either one, having the TV on a channel appropriate for children  or two, for slightly older children, teaching them how to use the remote and programming their TV for children appropriate channels, or using a service like Rogers Anyplace TV.

I cannot imagine ever putting a television in my young child’s room and especially leaving it on since they’re too young to even use a remote!

Maybe I’m alone on this. TV was never a hug part of my upbringing. I only had access to five channels growing up (on the one TV in the house) until highschool when my sister and I got jobs and started giving my mom a few dollars per month towards the cable bill since we deemed it necessary to have all cable channels (we needed access to MuchMusic and MTV!) Maybe I don’t ”get” it. My husband loves TV but I could easily live without it. When our little-one is around, other than the very odd episode of DVR’d/DVD/Netflix version of Thomas the Tank Engine or Elmo, or a special event like the upcoming Olympics, she doesn’t watch TV.

Though it drives me insane to read the same ten books over and over (from a collection of close to 100), given her age,  I would much rather do this all day then have her stare mindlessly at a TV.

I don’t hate the television, though I say I could live without it, I still enjoy the odd lazy day watching TV. I also respect that there are some very good programs on TV, I can honestly say they I’ve watched and learned some very interesting things thanks to the little black box in my living room but I didn’t start watching TV until I was old enough to remember. 14 months is just too young. Experts don’t recommend even introducing the TV until the age of two.

I also respect that it’s 2014 and the world is changing. There are children’s shows that are interactive and try to teach your child things. Children learn much better when they actually interact and get feedback, not from talking to a screen. Though I think it’s fun to supplement educational tools with TV or iDevices please don’t rely on these to teach your children necessary skills. Talk to them. Read to them. Play with them and watch them grow.

Also, as a safety precaution I don’t recommend mounting the TV above the child’s crib. Yeah, they did that too.

Am I being too harsh? Do you think it’s OK to have a TV in the room of a very young child?