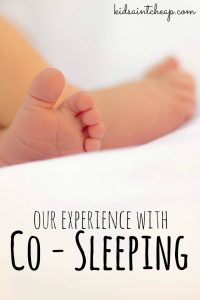 Before having our daughter, I never would have thought that we would co-sleep. We knew we wanted her close, in our room, for the first few weeks but could never have foreseen bed-sharing, for what ended up being almost 10 months.

The first few nights at home, our daughter slept in a bassinet close to the couch I was forced to sleep on since getting in and out of our bed was too challenging post c-section. After a few nights I was able to get into bed and we moved her to the bedroom where I would climb in and out of bed for nighttime nursing sessions.

The issue we were running into was that she was waking up too much when she nursed and would take me almost an hour to get her back to sleep, multiple times per night. After a few weeks of this, in a totally exhausted and desperate state, I brought her in bed with me where we both were able to sleep for the first time in almost a month. She was still waking every two to three hours to feed but because I wasn’t rousing her too much, she’d nurse then we’d both fall right back to sleep. It was glorious and so a new routine was formed.

It took my husband a little while to get comfortable with bed sharing as he was nervous about something happening to her while we slept, but I assured him that even though I was ‘’asleep’’ it was a very different hyper-aware sleep. In almost 10 months, we didn’t have any issues and it worked very well for our family.

Though my husband was initially nervous about it, he ended up really enjoying the experience as well. The three of us developed a nice closeness that we all enjoyed and looked forward to. Obviously if you have a spouse who isn’t in favor of bedsharing, or any form of co-sleeping, it likely won’t work out. Had my husband been dead-set against it I would not have continued but I’m so glad it did work.

People were warning us that with bedsharing we would end up with a college student still in our bed but that wasn’t the case. When we were all ready, and as I was preparing to go back to work, we transitioned her out of our bed and into her own crib. There was a two to three night transition but we haven’t looked back since and she’s four now.

Co-sleeping has many options that work well for various families. We did also try moving her pack-and-play crib beside our bed, but as soon as I would pick her up, position her, and lay her back down, she’d be awake for upwards of an hour. Nothing else seemed to work for us as well as bedsharing. Again, I never thought I’d be the type of parent who would even consider co-sleeping but it just worked for us. Having experienced it once I would likely do it again with future children.

Did you try co-sleeping? How did it work for you?