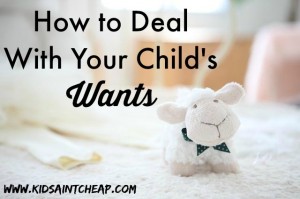 My daughter is still young enough that she doesn’t know what she wants yet (I’m find myself reigning my husband in from buying things for our daughter that she thinks she wants and needs ;), he always means well though!).

As she gets older I am fully prepared to have to explain that she can’t have everything she wants all the time. From both a financial and personal development stance, kids need to understand that things aren’t free. Hard work goes into affording all the things they desire and need.

While she’s still pre-school aged, as mentioned she doesn’t want much but she still desires some things.

We were walking through a store the other day and she was pointing towards the cookies in the bakery section. While the cookies only cost $3 they weren’t on the grocery list and a totally unnecessary item to buy. While buying them would have been much easier than listening to her whine the rest of the trip, I needed her to understand that she can’t get something just because she asks for it. I’m not suggesting sporadic treats once and a while aren’t nice but for us this was a moment I needed her to see she can’t always get something for asking.

On a separate occasion my husband went to the store for  few items, solo, and came home with a few toys for kiddo. Toys we hadn’t budgeted for but, in his defense they were on an incredible sale. Instead of just giving them to her we opted to use them for future gifts taking from future ”budgets”. Both Easter and her birthday are approaching so we decided to wait and use them for one of these dates instead and reallocate the funds when time comes.

A patient of mine has a twelve year old son who decided that he wanted to go on two school trips this year. Both out of province and both quite expensive. Being a single mom with three kids she told him she was limited in what she could contribute and made it clear that if he wanted these trips he was 100% on the hook to pay for them through fundraising events and side jobs.

Mom explained that this was an amazing experience for them.

She had her doubts but her son has reached his goal for one trip and only has $350 left to raise for his second trip. He’s shoveled driveways each storm, walking blocks to get people to pay him, gathered recyclables for refunds ($0.05/can here) and participated in every available fundraising event. Other than the $100 retainer fee mom had to pay to hold his spot for the trips he will be 100% paying his way, all thanks to a lot of hard work.

Finding ways to make money before the legal working age of 16 is difficult but not impossible. Mom mentioned she was fully prepared to pay him to help with odd jobs that are over and above his daily chores but she hasn’t had to yet. Mom is super proud of his hard work and he’s even more proud of himself knowing he’s going on these trips totally paid for himself, a grand total of almost $2,500.

Kids want things other than objects. They want to play organized sports, take music lessons, art classes and travel. No age is too young to have them understand they can’t necessarily do it all, especially if mom and dad are paying. Next summer our daughter will be enrolled in preschool soccer in the summer and dance in the winter. If she decides she wants to do something else instead she will likely have to decide what she wants more because we won’t be in a position to  pay for everything she wants.

There’s a fine line between giving your kids an experience and giving them something just because they want it. Make sure you’re able to recognize the difference before deciding what is important to them and your family.

How Do You Deal With Your Child’s Wants?