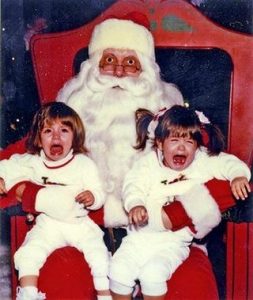 What is it about Christmas that just brings out such glee in kids?  Is it the wonderful, beautiful lights that festoon every lamppost or anything upright for that matter?  Is it the entry of seasonal, very delicious meals?   For kids, Christmas time is Santa time! The moment my tree comes out of hiding at home, my kids automatically do their own short versions of Balki Bartokomous’s ‘Dance of Joy’ (age hint here).  It is such a funny thing to see and truly the excitement from them is fantastic.  Then the pressure sets in and I start to feel all the responsibility attached with Santa Claus and making sure they have a memorable Christmas.

Where Did Santa Claus Come From?

This year, I started to think about this tradition.  What is it really?  Where did it come from?  And how do I divert the seemingly mindless consumerism of the idea of Santa Claus to what Christmas should truly mean?  I did some research first (naturally) and this is what I found.

Santa Claus, also known as Saint Nicholas, Father Christmas, Kris Kringle, and simply “Santa”, is a figure with legendary, historical and folkloric aspects who, in many western cultures, is said to bring gifts to the homes of the good children during the late evening and overnight hours of Christmas Eve, December 24.[1] The modern figure was derived from the Dutch figure of Sinterklaas, which, in turn, may have part of its basis in hagiographical tales concerning the historical figure of gift giver Saint Nicholas…Santa Claus is generally depicted as a plump, jolly, white-bearded man wearing a red coat with white collar and cuffs, white-cuffed red trousers, and black leather belt and boots (images of him rarely have a beard with no mustache)… According to a tradition which can be traced to the 1820s, Santa Claus lives at the North Pole, with a large number of magical elves, and nine (originally eight) flying reindeer. Since the 20th century, in an idea popularized by the 1934 song “Santa Claus Is Coming to Town”, Santa Claus has been believed to make a list of children throughout the world, categorizing them according to their behavior (“naughty” or “nice”) and to deliver presents, including toys, and candy to all of the good boys and girls in the world, and sometimes coal to the naughty children, on the single night of Christmas Eve. He accomplishes this feat with the aid of the elves who make the toys in the workshop and the reindeer who pull his sleigh. (Wikipedia)

Basically, it appears that the current tradition of Santa Claus and gift-giving is in fact a mix of ancient Greek folklore, Germanic Paganism, and Dutch folklore.  The figure of Santa Claus can be derived from a combination of the Greek Saint Nicholas of Myra, a Christian saint known for giving generously to the poor, who is also the basis of the Dutch Sinterklaas, and the Germanic god Odin who was known to ride his eight-legged horse Sleipnir over great distances and giving gifts to children who would leave carrots and treats for his horse to nibble on as he passed their chimneys.  Sinterklass is a stately old man who gives gifts to well-behaved children, and Odin is known as an old man with a long white beard.  Over the centuries, all these figures appear to have merged together to become the Santa Claus of today.  Of course, thanks to Coca Cola, we have the ubiquitous jolly, round, old man with a long white beard, in a bright red suit.

Where To Focus This Year

All in all, the main theme of what are the supposed origins of the current tradition is giving and this is what I want to focus on this year.  I am trying to teach my kids that this is the season for giving- giving to the people you love as an expression of love, to your friends as an expression of friendship, and not so much in expectation of something in return.  I have started asking them what they want to give their friends and cousins and aunts and have tried to tell them that it does not matter what they get if they get gifts and that the important thing is that they are able to show friends and family their love and friendship. Now, I don’t want them to be too materialistic so I tell them that they don’t need to buy anything expensive to show how they feel and that they can make their gifts too.  Of course, I don’t want to be a complete Scrooge and take away the joy of wishing for favorite toys so I have also asked them to make their list to Santa but I have told them that he won’t be able to give everything on the list because he has to give other children gifts too and that it is still great if he gives them one or two from their list, to which they expressed satisfaction.

What do you guys think?  Too Scrooge-y or over-thought? What are some of your thoughts about the meaning of Christmas, beyond the lights and the commercialism of it all?