You are here: Home / Parenting Blog at KidsAintCheap / Money and Finances / Should You Buy Your Kid a Car? 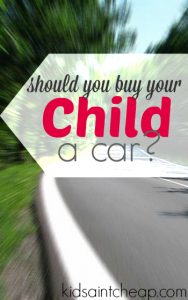 I have friends who, for their 16th birthday received a car as their gift from their parents. This concept was totally out of the question in my house and most other friends, but there were a handful of kids growing up who were given cars as presents.

Depending on where you live, a vehicle may be a necessity to live your life; I’m not talking about you. I’m talking about the average suburban family who chooses to spend a bunch of cash (or in some cases financing!) to give their kid a car.

I Paid for My First Car

I didn’t need my own car when I was a teenager. My mom has a pretty decent work schedule that would allow me to have access to the car pretty frequently. I had a job and was required to help contribute to the gas used and I also gave her $25 per month to put towards insurance. To me this was fair.

I didn’t own my own car until I was 23 when it became a necessity with my university schedule. I had to be at clinic before any public bus could get me there from where I was living, and late nights at school were meaning me taking the public bus home alone and added a 50 minute commute (a drive I could do in 20 minutes).

When the time came for me to get my own (very used) vehicle I paid for it myself. I had a very limited budget but found a Toyota Corolla from an older man who couldn’t drive anymore. He sold it to me for $750, fully inspected.

We Won’t Be Buying Our Daughter a Car

When my daughter is old enough I don’t suspect we will be buying her, her own vehicle. If she wants one, we may help her in some way but it won’t be gifted to her without her asking and nothing will happen until she proves the maturity of owning a vehicle.

When she gets her first job, if she decides owning a car of her own is what she wants, then we will help her establish savings goals. It isn’t just the price of the vehicle, she will need to save enough for everything that comes with it (like plates, registration etc.). While we establish the budget and she is saving her money, she will still be driving with us in our vehicle where she will build her driving confidence. I also don’t want her owning a vehicle to take away all of her money because that’s just as irresponsible.

While we may help her financially, maybe matching a certain savings goal of her own, we won’t outright buy a vehicle for her sole use. In most cases I don’t think it’s necessary. It’s not like my husband and I plan on driving around town in $60,000 cars that we may worry she will crash either.

A car is a massive responsibility. Until she can afford the car, the maintenance, insurance and gas we won’t allow her to own one. I also want to have her build her confidence as a driver before owning her own vehicle. For these reasons ideally she waits a while before getting her own car.

Did you buy your child a car? Why/why not?