You are here: Home / Parenting Blog at KidsAintCheap / Growing Up / Your Teen and Their First Car 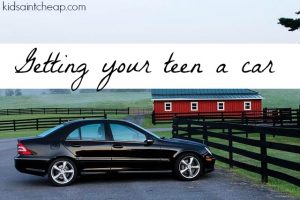 Growing up, I didn’t really have to worry about the need for my own car once I turned 16. My mom had a vehicle which she used rarely and for the most part allowed me to have it when I wanted it. I however don’t know if I would do the same with my kids.

Though owning a car is a huge responsibility (something I learned at 22 when I finally bought my first car), I don’t know if I want my newly licensed teen driving around in my vehicle either. I’ve always been a responsible driver but managed to get myself in two accidents writing off my mom’s car once (not my fault!). I also don’t like the idea of a car simply being given to a teen because they’ve reached a certain age, but I do like lessons that are learned in the responsibility of co-owning a vehicle of their own.

The car doesn’t, and shouldn’t, be anything fancy or new. It should be something safe, reliable and affordable for the teen and parents. Something that won’t require a bunch of money to maintain but something that you won’t be too heartbroken over if it ends up being written off in a car accident (hopefully not!).

As adults we know you can’t own a car if you don’t have income coming in. Same would go for the teen. They will be responsible for their own gas (in their car or yours) as well as contributing to the maintenance of said vehicle. If they don’t have a way of financially supporting themselves I personally don’t see how it’s fair they have access to a vehicle of their ‘’own’’.

Some teens require a car to actually earn money depending on their job while others may just want a vehicle for leisure, to get to and from school and soccer practice. Whatever the reason behind the wanting of the vehicle, they should help pay for it, if not finance the whole thing.

If they can’t come up with the money to pay for the vehicle in cash themselves, and they need it (maybe they got a job doing pizza delivery starting in two weeks) consider implementing a family issued loan. Someone I know issued a loan to her daughter when she turned 18 so she would be able to drive to and from university which was an hour each way. Mom bought the car for $2,500 and gave her daughter 12 months to pay her back, knowing she had a great summer job lined up. The car was repaid before the end of the summer.

If and when a teen gets a car of their own, is definitely unique to each family but I think there are many advantages to giving them access to a vehicle early into their driving days. There would obviously be many rules in place but I think if obey have the ability to teach many important life lessons.

Did you have a car when you were a teen? Did your parents help you buy it?